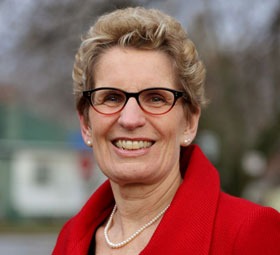 Premier Wynne announces a retrofit program to install sprinkler systems in buildings housing vulnerable persons. The new regulations are supposed to be announced on Thursday, 9 May 2013.

Wynne says the Liberals will make automatic sprinklers mandatory in all homes for seniors and for people with disabilities, but she didn’t give a time frame for when the fire safety systems must be installed.

The premier got a standing ovation from the Ontario Association of Fire Chiefs when she announced the government would unveil the necessary legislation next week.

There are about 40,000 seniors living in 700 retirement homes in Ontario, another 76,000 people in about 400 long-term care facilities and 3,000 other homes for vulnerable residents.

Wynne says there will be other amendments to the fire code announced next week, but the government will continue to study the fire chiefs’ call for mandatory carbon monoxide detectors in all homes.

The government’s technical advisory committee which investigated the various retirement and long-term care homes had been scheduled to make its recommendations on sprinkler systems by last fall.

AJAX, ON, May 6, 2013 /CNW/ – Earlier today at the Ontario Association of Fire Chiefs (OAFC) Annual Conference, Premier Kathleen Wynne, joined by Minister of Community Safety and Correctional Services, Madeline Meilleur, announced that the government will be implementing the recommendation of the vulnerable occupancies Technical Advisory Committee (TAC) to require the retroactive installation of automatic sprinklers.

“The issue of automatic fire sprinklers in vulnerable occupancies is an issue that has been of the utmost importance to fire chiefs across Ontario and one that we, as an association, have been focusing on for many many years,” said Kevin Foster, President OAFC. “On behalf of the OAFC, we are very pleased with the Premier’s announcement and look forward to future announcements from the Minister regarding the implementation of other TAC recommendations aimed at improving fire safety.”

There is no question that automatic sprinklers in vulnerable occupancies will save lives. Four Coroners Juries have recommended this important improvement. The OAFC looks forward to continuing to work with this and other issues with government on our mission of “Leading Innovation and Excellence in Public and Life Safety”.

The Ontario Association of Fire Chiefs represents the chief fire officers of the 458 municipal fire departments in the Province of Ontario. These Chiefs Officers are ultimately responsible, by statute, for the management and delivery of fire, rescue, and emergency response to the 13 million residents of Ontario.

By: Robert Benzie Provincial, The Toronto Star Published on Mon May 06 2013

Sprinkler systems will be mandatory in all seniors’ homes under new rules coming later this week, says Premier Kathleen Wynne.
Speaking to the annual general meeting of the Ontario Association of Fire Chiefs on Monday, Wynne praised them for their efforts toward “enhancing fire safety and housing for seniors and other vulnerable people.”

“The OAFC for many years has been a leading advocate for making sprinklers mandatory in existing senior’s residences and homes for our most vulnerable citizens,” the premier said. “Our government supports that position and that’s why we’re moving to make automatic sprinklers mandatory in residences for seniors, people with disabilities, and other vulnerable citizens of Ontario.”
There have been at least 45 fire-related deaths in Ontario seniors’ homes since 1980. Community Safety Minister Madeleine Meilleur said the changes to the fire code would be unveiled Thursday.

“The change will take affect soon. It’s very good news because we’re the first in Canada to have done that,” Meilleur told reporters at Queen’s Park. “It’s for the safety of our most vulnerable people. I don’t want to … see any other senior or vulnerable person in Ontario to pass away in a fire in their residence because we have not adopted this regulation,” she said.

So far it’s unclear how long seniors’ homes will be given to retrofit and what costs would be covered.

It’s expected that all nursing and retirement homes with more than four residents would have to install sprinklers within the next five years. In January, former premier Dalton McGuinty’s government pledged $20 million over two years to install sprinkler systems in seniors’ facilities, check electrical systems, and enhance staff training. That money was promised in the wake of a Star investigation that found residents in many seniors’ homes were at risk because their buildings lack fire-suppressing gear.

While residences built after 1998 must have sprinklers, such devices have not been required in some 4,000 older facilities across the province, which house more than 200,000 seniors and other vulnerable residents.

Posted in News and tagged Ontario Association of Fire Chiefs